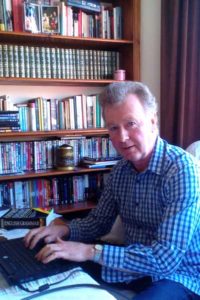 After graduating with a degree in English in 1982, Gerry left his native Northern Ireland to explore the balmier climes of Italy. He first taught English privately in Perugia, before moving to Sicily and a teaching job in a technical college outside Catania.

On his return to Ireland, he trained at the Dublin Theatre School, before working as an actor in both parts of the island. Throughout this period he worked as a voice-over artist and radio drama actor for commercial advertisers, BBC Northern Ireland and RTE, Ireland’s public service broadcaster. This experience developed his keen appreciation of the sounds and patterns of spoken English and he has a special interest in helping non–native speakers to overcome the challenges of English pronunciation so that they can communicate effectively and with greater confidence.

A later career shift saw Gerry working as an adult education and careers advisor before he returned, with enthusiasm, to teaching English as a second language at Northern Regional College in Coleraine, where he enjoys preparing students for City & Guilds qualifications at several levels.

After meeting his wife, Vicki, he travelled to Spain for the first time, and was immediately enchanted by the landscapes, food, wine and vibrant sense of community that makes rural Aragon a very special place. His growing knowledge of the Spanish language has given him an awareness of the problems that spoken English can pose to the Spanish speaker and an eagerness to help them speak English in as relaxed and natural a way as possible.