Victoria Olivan-Vinue, (Vicki) was born in Sabiñánigo and educated in Zaragoza, but has very deep roots in Biscarrues (therefore 100% aragonesa) She is currently living between Spain and Northern Ireland.

She graduated with a degree in Contemporary History from the University of Zaragoza, but had always loved literature, and collaborated in several alternative magazines during her student days. In the early nineties she started to teach Spanish when the first wave of migrant workers arrived in Zaragoza,and also taught literacy and numeracy with Codef, a charity providing education to disadvantaged young adults.

On returning to study for a degree in geography, she was awarded an Erasmus grant and an opportunity to study for a year at the University of Ulster in Coleraine. During that year she was captivated by beauty of Northern Ireland and the charm of its people, so on finishing her course in Zaragoza, she decided to return. It was then that she met her husband, Gerry, and made Northern Ireland her home. 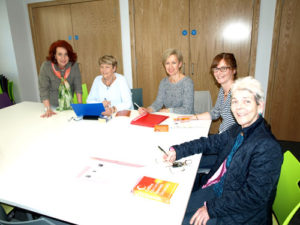 She currently spends most of the year in Coleraine, gateway to the beautiful Causeway Coast area, where she has worked as a Spanish teacher for many years in a wide range of settings. She has taught adults at both conversational and GCSE levels for the last 20 years and has spent 14 years teaching Spanish to primary and secondary school students, covering every stage from KS1 to KS4. She has gained a wide understanding of the UK modern languages curriculum, as well as the expectations of English speakers learning Spanish and the linguistic challenges that they face. 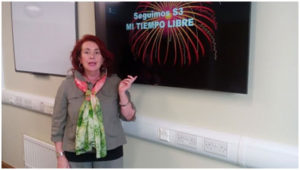 As a teacher, Vicki gets to spend two months of the year in her Spanish home, immersed in the comings and goings of her native land, but after 22 years in Northern Ireland she sees Spain and Aragon with fresh eyes.  She believes that bringing people from both countries together will benefit students of both languages. – and this is exactly what she aims to do with Inter2lingis.